August 21, 2019
According to the arrangement of the standardization and revision plan of the National Standardization Administration of the People's Republic of China in 2006, the China Packaging Federation and other relevant units are responsible for the two countries of GB/T6543-1986 Corrugated Boxes and GB/T5033-1985 Corrugated Boxes for Export Packaging. The standard was revised. The standard is under the jurisdiction of the National Packaging Standardization Technical Committee. It began full implementation on October 1, 2008.

The national standards for corrugated boxes were revised mainly in accordance with the standard Japanese Industrial Standards JISZ1506 "Corrugated Shipping Containers" and relevant foreign standards. At the same time, it also refers to the two national standards of GB/T6543-1986 "corrugated cardboard boxes" and GB/T5033-1985 "corrugated paper boxes for export product packaging" and the data provided by relevant companies. Comprehensive consideration has been given to the relevant standards of foreign industrialized countries, the actual situation of users and producers in China, and the implementation of the original standards. In addition, the corrugated cardboard standard corresponding to the new standard of â€œcorrugated cardboardâ€ has been adopted, which is in line with the national conditions as a whole. In particular: an increase of the normative references, modifications to adhesives, wire and lap widths, defect requirements, packaging markings, transportation and storage requirements; box size in section "6 Experiments and Inspections" It is clearer and more reasonable to shake and cover inspections; the third category in the original standard classification was removed, and the formula for calculating the compressive strength of corrugated boxes in Appendix C was modified. These are all major features of the revision of national standards for corrugated boxes and reflect practicality. Attitude.

The new standard replaces GB/T 6543-1986 Corrugated Boxes and GB/T5033-1985 Corrugated Boxes for Export Packaging. In the 22 years of the establishment of the original national standard, the overall situation of China's corrugated industry has undergone tremendous changes, which are no longer the same in terms of quantity, quality and scale. Due to the rapid development of corrugated packaging, corrugated box companies have made rapid progress in equipment, materials, technology, processes, testing levels, environmental conditions, and human resources. Equipment has been continuously updated, technology has improved, environmental conditions have improved, and market requirements have gradually improved. Ascension has already produced parts that do not match the actual market conditions. China's corrugated boxes and related standards were revised only 22 years apart, and Japan is revised every six years. In order to be in line with international standards as soon as possible, the new national standards should adopt parent countries of foreign advanced countries as far as possible. This is the premise and basis for formulating national standards. It is of great significance to the packaging industry in China. National corrugated box companies and end users are expecting the official implementation of the new national standards.

There is no international standard for â€œcorrugated cardboardâ€ at present. In order to try to conform with international standards, the standards of foreign advanced countries should be adopted as far as possible in the new national standards. According to this guiding ideology, Japan's JISZ1516-2003 â€œCorrugated Paper for Packagingâ€ was used as the parent, and reference was made to a large number of standards and documents from various countries in the world, and the tendency to approach the Japanese national standard was selected, consistent with the stage of economic development in China. National conditions. GB/T6544-2008 "Corrugated Board" National Standard replaces GB/T6544-1999 "Corrugated Packaging Materials", GB/T5034-1985 "Corrugated Cardboard for Export Packaging", and is standardized by the General Administration of Quality Supervision, Inspection and Quarantine and the State. The management committee was officially released on October 1, 2008 for full implementation. Throughout the development of international corrugated board standards, starting from the late 1980s and early 1990s, the carton standards in many European and American countries began to be revised, gradually abandoning the method of classifying cartons according to the quality of the contents and the maximum overall size.

The original standard name is "Corrugated Paper Box," which has a wide range of names, including corrugated boxes for shipping and packaging, and corrugated boxes for sale, inner packing boxes, and outer packing boxes, which are not in conformity with the standards. Therefore, the current standard name is: â€œCorrugated cardboard boxes for transport packagingâ€, which defines the scope of use, which is in line with the content of the new standard, and also matches the name of the main reference standard Japanese Industrial Standard JISZ1506 â€œCorrugated Shipping Containersâ€. As for the sale of corrugated boxes and corrugated boxes for other purposes, reference can be made to the provisions of this standard. However, there should be other different requirements, such as sales of corrugated boxes to meet the special requirements of decorative decoration, printing, aesthetics, etc., and other aspects such as strength may be reduced. As for the three-layer corrugated carton, relevant standards should be formulated separately, which is in line with the corrugated paper box standard system in Japan and the United States. Therefore, the new standard only applies to single corrugated cartons and double corrugated cartons for transport packaging. The name was formally designated as GB/T6543-2008 "Single Corrugated Paper Box and Double Corrugated Carton Box for Transportation Packaging."

The original national standard classifies corrugated boxes into three categories, which are also three levels. Mainly in accordance with the export, domestic sales and the content of the content to be divided. With the current development trend of domestic and foreign trade and the internationalization of the economy, the original division method is not scientific enough and reasonable. The newly revised corrugated paperboard standard intends to classify paperboard as "excellent product" and "qualified product", which is also not suitable for corrugated paper boxes. The main function of the corrugated box is to protect the contents from the environment (physical, chemical, mechanical, climatic, etc.), so if the classification is to be classified according to the severity of the environmental conditions in which it will encounter. Moreover, as a national standard, a minimum requirement for corrugated boxes should be put forward, but considering the current situation and usage habits in China, it is divided into two categories. Namely: Type 1 cartons are mainly used in the situation where the storage and transportation environment is rather poor; Type 2 cartons are mainly used in the better circulation environment.

The quality of storage and transportation environment is relative, standard division is only a concept of a principle and a relative concept. As for the difference and definition, it should be determined by the user considering many factors such as the product's storage and delivery time, means of transport, number of turnovers, storage location, and weather conditions and the carrying capacity of the contents. For manufacturers of corrugated boxes, different types of products should have different prices.

As to why it is divided into categories 1, 2 instead of being classified as superior and qualified, it is mainly to consider that each user has different understanding of superiority and conformity. Some users may not meet the qualifications that are acceptable, that is, the requirements are different. Therefore, the concept of "qualified" and "excellent" is not given in the standard.

If the division between exports and domestic sales is not scientific and reasonable, because the purpose of packaging is to protect the goods from environmental damage, according to the circulation environment classification is relatively more reasonable (because of China's vast territory, complex regional conditions, exports may be a good environment, domestic sales Maybe bad environment).

As for the selection of user 1 and type 2 cartons and their understanding and mastery of the circulation environment experienced by their own products, it is up to the user to consider because only the user knows where their product distribution channels are and the mode of transportation chosen (perhaps the same product The direction of flow is also different. Before it is accurately grasped, one type of box should be used first for safety. If quantitative partitioning is given, it is still difficult to determine what exact quantitative factors (physical, chemical, biological, etc.) apply strictly to Category 1 or 2. Current users are also less likely to grasp all quantitative data of their product's circulation environment conditions.

In theory, the packaging box mainly controls the two physical properties of breaking strength and side pressure strength. As long as the two indicators are stable, the physical properties of the entire packaging box are stable. The new standard for corrugated cartons is based on the class name code of "Corrugated Cardboard", and is divided into two categories according to the quality. When the standards of "breaking strength" and "edge strength" are quoted, according to The new standard in the â€œCardboardâ€ section 4.3 states that â€œThe burst strength and side pressure strength of various grades can be selected according to the circulation environment or the requirements of customers.â€ Uniform transportation from the United Kingdom, the United States and Canada, Switzerland, Europe, etc. In the carton classification regulations, only one item of "carton burst resistance" is listed. The author believes that the strengths specified by the national standards are the minimum guarantee value. When the price is set too high, the cost is increased and the economy is not economical. When the storage condition is too low, the carton is easily crushed and the content is damaged. China and Japan and South Korea have similar resources and national conditions, but their technical level is still far inferior to that of Japan. It is reasonable to refer to Japanâ€™s â€œtransport packaging corrugated boxesâ€ standard. If any of the contents of the box itself has a certain supporting role, this can be based on the actual situation of the product, the relative requirements of slightly higher resistance to breaking, the edge pressure is slightly lower, not necessarily high burst resistance must be high side pressure, so as not to cause irrational Packing waste. 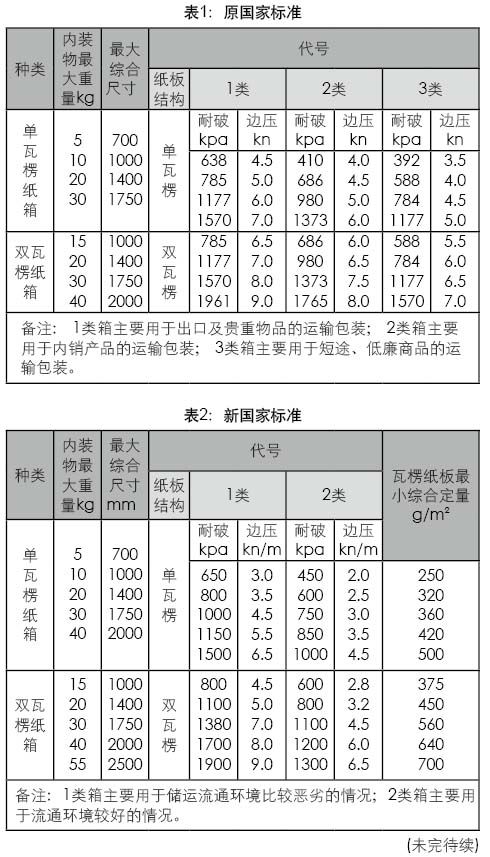